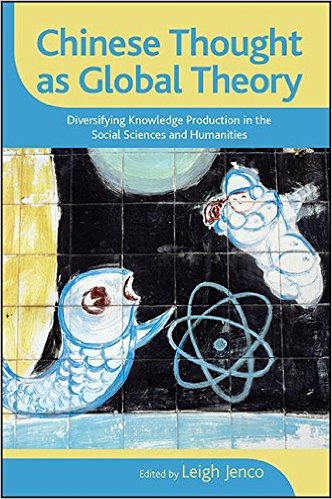 Another fresh book just published revolves around how non-Western (in this case Chinese) thought can influence our global understanding of the world, loose from a normatively Western gaze or interpretive framework. As the introduction kicks it off:

“Globalization has expanded connections and narrowed distances between cultural, ethnic, and social groups. These developments would suggest an ever-greater inclusion of global thought traditions to stand not only as the objects of academic inquiry, but also as its generative structure and vocabulary. However, despite sophisticated examinations by sociologists, literary theorists, historians, anthropologists, and others about the nature of cultural exchange, the descriptions and theorizations of such trends remain firmly committed to a theoretical vocabulary that emerged largely from the languages and experiences of the Anglo-European works. Even those research paradigms most critical of Eurocentrism - including postcolonialism and comparative political theory - tend to frame their theoretical contributions as internal critiques of existing Europeanized discourses or as reminders of “both equivalences and differences” across cultures." (p. 1)

I've just skimmed through this new book on global history by Sebastian Conrad (2016, Princeton University Press). It seems to me a very clean, careful and useful book, and I immediately found some great passages and quotes for digestion. Here's one on balancing Eurocentrism, pages 168-169 from the chapter "Positionality."

"Let us, therefore, move to the third aspect that we wish to explore, conceptual Eurocentrism. On this level, Eurocentrism means the projection of a particular set of concepts, values, and chronologies onto the past. Dipesh Chakrabarty has argued that “insofar as the academic discourse of history—that is, ‘history’ as a discourse produced at the institutional site of the university—is concerned, ‘Europe’ remains the sovereign, theoretical subject of all histories, including the ones we call ‘Indian,’ ‘Chinese,’ ‘Kenyan,’ and so on. There is a peculiar way in which all these other histories tend to become variations on a master narrative that could be called ‘the history of Europe.’” Ironically, even accounts that try to bracket the historical influence of Europe and to emphasize in its place indigenous dynamics and trajectories, can be Eurocentric in their vocabulary, and in their general logic. For example, recent popular works that see a Chinese fleet under Admiral Zheng He reach California in 1421 and Florence in 1434 stake a claim to Chinese priority, but they identify as stepping-stones to modernity the same events as do traditional Eurocentric accounts—namely, the discovery of the Americas and the Renaissance, both of which they now attribute to China. Among academic works, Andre Gunder Frank’s invitation to ReOrient already in its title indicates a shift from Eurocentrism to an emphatic Sinocentrism. While Frank reduces the dominance of Europe to a brief interlude, his account is based on the same parameters—markets, trade, and economic growth—that also governed Eurocentric orthodoxy. The result here is a simple reversal, minus any profound challenge to the underlying concepts and historical narratives. In essence, the reason for this is that the modern disciplines that originated in Europe were soon adopted around the world. Over the course of the nineteenth century, under the pressures of global integration and Western hegemony, the parameters and concepts of European academic fields assumed hegemonic status beyond the societies for which they were originally devised. European history was treated as the model for universal development in places like Argentina and South Africa, India and Vietnam. This view was engrained in the conceptual tools of the modern social sciences and has thus been reiterated and reproduced constantly, and frequently unconsciously. Ostensibly analytical terms such as “nation,” “revolution,” “society,” and “civilization” have transformed a parochial (European) experience into a (universalistic) theory that pre-structures the interpretation of all local pasts. “Only ‘Europe’, ” as Chakrabarty has summarized this logic, “is theoretically [. . .] knowable; all other histories are matters of empirical research that fleshes out a theoretical skeleton which is substantially ‘Europe’.” In historiographical practice, the use of European terminology and the underlying philosophy of history developed in and for Europe have resulted in narratives of a long progression from feudal to civil society, from tradition to modernity. The historical differences and particular trajectories exhibited by non-Western societies are typically described in a language of lack and failure, in a rhetoric of “not yet,” and treated as deficits."

Insitut für Länderkunde Colloquium, Leipzig, 24 April 2016 This talk addresses some arguments for a transnational perspective against previously provincialized and compartmentalized accounts on the epitomized “quantitative revolution” in geography of the early Cold War […]